0.4.3 will probably be the biggest update from a usability improvement perspective ever (but I always say that). The idea was that 0.4.3 would be a minor update, and in many ways it is, but I just can't shake the feeling that the WEB-UI is a game changer.

So what is new you ask?

Well the WEB UI is brand new and a nice way to configure NSClient++ both if you are an advanced user or if you are a new user. The WEB UI will in the future be extended to accepting and submitting metrics and checks as well as remotely connect to a running NSClient++ instance. But currently if you have the WEBUI module (WEBServer) you can load/unload modules configure modules execute queries as well as run various commands. I would say that this can effectively replace the "nscp test" mode. 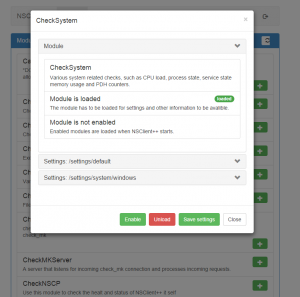 Since I reworked the WEB test client I did the same for the regular test client os it now has many new commands to load and unload modules as well as previously execute commands. You help for details.

I have spent a lot of time enhancing the NRPE experience for instance the multi package patch is enabled by default. Adding security and certificates is now much easier. And there is a command line client for configuring NRPE. the WEB-ui has the same thing and this will be coming to many more places so keep looking out for it.

If you are using NRPE you are in for a chock!

In 0.4.3 we will no longer support the rather insecure regular NRPE! You can still enable support but you have to do so (in the installer or using the command line mode). So keep a heads up when you run the installer so you wont miss it.

The idea is that when NSClient++ ships a new check_nrpe will be provided which wont have the limitations of the old one.

Dot net has received some well deserved love and now actually works, there is even built-in protobuf support which means you no longer need to hand craft messages or use JSON. We also proved and build a sample plugin so you can see how to do it.

The focus has (and still is) on bug fixes so NSClient++ contains numerous bug fixes and enhancements in addition to the above mentioned changes. As I have said before the idea with 0.4.3 is to make a bugfixed 0.4.2 so there wont be that many changes.

This is an early beta version and there a lot of things missing. Most important is that I will go through all defects both on github and trac and try to close as many as possible. But we are also missing some core features.

You can download it from the beta section in downloads.

Summer is over and my first NSClient++ training!

An amazing summer is over!

Just thought I'd let you all know that vacation is over and I will slowly crawl out of the hole I have been hiding in and start working again... I have thus far responded to about half of the emails and will ...

A new build of NSClient++ has been released.\ It is mainly a bug fixes release and fixes most known issues which has surfaced in the last few weeks.\ For those who do not know we have switched to using github for tickets which has been a huge success. I will ...